To compile and use proxmark3 on NixOS you need some packages. I created a nix-shell file with all needed dependencies.

Copy this file as shell.nix to the cloned proxmark3 folder and run sudo nix-shell. Continue then the normal compile guide.

Since a few years i use NixOS as my favorite Linux distribution. NixOS is a Linux distribution based on the Nix package manager and build system. It supports reproducible and declarative system-wide configuration management as well as atomic upgrades and rollbacks, although it can additionally support imperative package and user management. See NixOS Wiki.

It‘s perfectly fine and recommended to leave system.stateVersion value in the configuration at the release version of the first install of this system. You should only bump this option, if you are sure that you can or have migrated all state on your system which is affected by this option. Before changing this value read the documentation for this option (e.g. man configuration.nix or on NixOS Options).

Use pipewire for Audio (with Bluetooth)

Some time ago I bought a Weller WE1010 soldering station. On all product photos it looks as if the display has a backlight – unfortunately this is not the case. Not even the on/off switch is illuminated, like on the old models. Shame on you Weller, that really goes better – especially for the price!

A backlight for the display would improve the readability enormously, but a retrofit is not so easy. I have instead installed a light under the on/off switch to see at least better whether the soldering station is switched on. I get the power directly from transformer, which supplies around 24V/AC. As LED i used this great Red 6mm 12-24V AC/DC LED.

I assume no warranty or responsibility for any damage or injury. The conversion is at your own risk! When opening devices that are operated with mains voltage there is danger to life!

The links to AliExpress are advertising links. I would be happy if you use this link, but of course you don’t have to. I have linked exactly the offers from which I have also bought and was satisfied with the supplier and the goods. The products can of course be bought anywhere.

After restoring an Exchange mailbox and sorting the mails, I wanted to delete the restore folder, but Outlook won’t let me:

MikroTik RouterOS doesn’t yet support DNS names for peer entpoints (v7.1.1). As a workaround, you can set the endpoint address using the CLI, but RouterOS will not re-resolve the DNS name. If the IP addresses behind the DNS name change at some point, for example if you use DDNS, the WireGuard tunnel will eventually stop working. As a solution, you can use a script that checks if the peer endpoint address still matches the dns name and if not, updates to the latest ip address of the DNS name.

Add under System > Scheduler a new script and choose a useful interval. 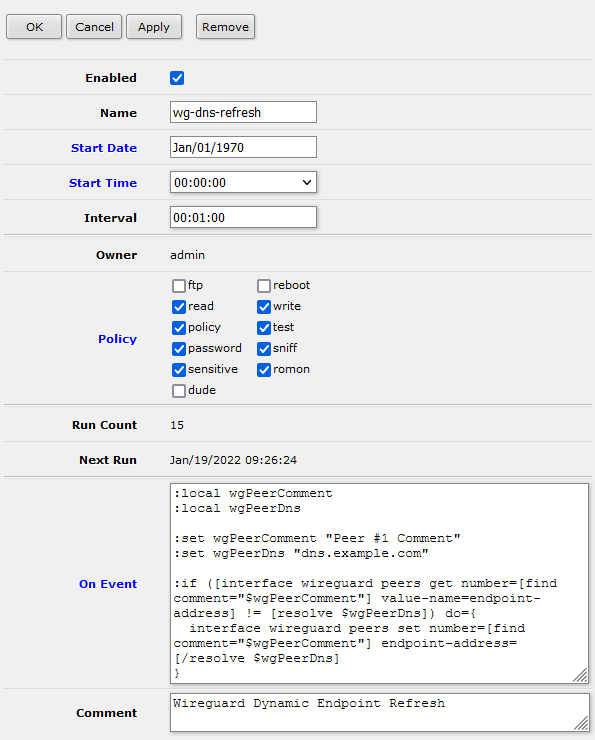 Convert only Audio. EAC3 to AC3 for Example

I have two identical Raspberry Pi 3B+ (RPi3B+) running OctoPrint to control my two 3D printers and provide a livestream of the connected webcams when needed. A few months ago I noticed that the “newer” of the two RPIs sporadically lost the WiFi connection after a few minutes or hours. To check if its a a hardware problem I swapped the SD cards between both PIs, but the problem moves with the SD Card, which means its a software problem. First attempts:

I have connected a LAN cable, waited until the connection was interrupted and tried various commands to restore the connection. Unfortunately nothing helped. I found some errors in the syslog like mailbox indicates firmware halted and some GitHub issues from RaspberryPi, but no final solution:

Then I continued to search for differences between the two PIs and found out that the “working Pi” had older drivers 7.45.154 that the “problem Pi”, who had 7.45.229. I downgraded the firmware to 7.45.154 (/lib/firmware/brcm – my older Pi had these files) and disabled power management. Now, after some weeks of 8h printing each and enabled webcam no problems. With 7.45.229 and also disabled power management it freezes. The firmware files were the only thing I changed.